Thanks for having me!  I’m thrilled to be here today to talk a little bit about Hot Rods and each of the garage mates.  Mustang Sally, out tomorrow, features the lone female mechanic of the group as well as the two guys she’s set her sights on, Eli and Alanso, who were the subject of King Cobra, the first book in the series.  I’d love to introduce your readers to the cast of the series plus the Powertools Crew makes several appearances as they help Joe’s cousin Eli navigate through building a relationship like the one they have and cherish!

One cool thing about this series is that the inspiration images I used to make each character vivid in my mind were actually contracted for the covers.  I’ve included a link on each character below.  It’s very rare that the cover matches so exactly what I had in mind when I wrote the book.  Most of the time we’re at the mercy of stock photography which matches sort of to not at all.  So this is terrific!  I’ve included some random fun facts from my series bible for each character (just a tidbit of how I sketch them all out before I start writing so I’m consistent and make them seem more like real people to myself) and the book they’re the main focus of next to their name.  I hope readers enjoy getting to know the new guys, but no worries, you’ll see lots of the Powertools crew too as they coach their friends to happily ever afters.

Eli London (King Cobra) – Age 31, Height 6’2”, smokes when drunk, has a temper when Alanso or Sally aren’t around to calm him down, seems older than he is, financially conservative, altruistic, has shallow relationships with women (until now).

Alanso Diaz drives a Honda REPSOL motorcycle, orange with a #69 racing decal, a main character in both King Cobra and Mustang Sally.  Bald, wears big chains and bigger sunglasses.  Lots of colorful tattoos, some religious.  Issues – abandonment, feels unworthy of lasting love.  Job: engine tuner.  Alanso is Cuban and speaks Spanish a lot in the book, I got to consult with several fans on how to curse like a Cuban for his character.  Hysterical!

Salome Rider (Mustang Sally) – second down in the strip of photos.  Age 27.  Loves dancing when no one’s looking, painting her nails crazy schemes.  Feminine yet badass.  Dislkikes religious zealots as she grew up on a commune in Utah.  Prefers top 40’s music.  Tons of piercings.  Job:  painting cars and designing hot rods.  Drives a pink convertible mustang with white leather top and interior, 1969.

Kaige Davis (Super Nova) – blond dreadlocks, bright green eyes, quiet, talks when he has something important to say.  Known for building up pressure than exploding like a super nova.  Bisexual.  Likes alternative music.  General mechanic as well as being in charge of new ideas and business strategy.  Thinks a lot then makes suggestions.  Integrates new technology in classics.  Drives a Chevy Nova, green with flames down the side.

Bryce Ellington (Rebel on the Run) – top photo.  Age 30.  Height 6’3”.  Well spoken.  Helps others write things when they need proofing.  Handles all communication with customers.  Rubs his side when thinking.  Wears ripped and out of style clothing.  Likes proven worth (character vs. cash), honest affection and beer.  Straight-ish.  Huge tattoo back piece of money paving the way to hell.  Job:  customer service, pricing and general mechanic.  Drives a Rebel AMC, white with red stripe and blue bottom.

Carver Levon half of the couple featured in Barracuda’s Heart.  Light beard.  Fun, prankster, practical joker, peacekeeper.  Very social, likes being around the rest of the gang.  Almost asexual until the Hot Rods shenanigans start.  Avoids conflict.  Doesn’t like being touched casually.  Likes to be chilled out.  Listens to Michael Buble, Jack Johnson, easy listening.  Drives an orange Plymouth Road Runner.  Nickname: Meep (the noise the road runner makes!).  Job:  General mechanic and parts sourcer, likes to go rummaging in the quiet by himself. 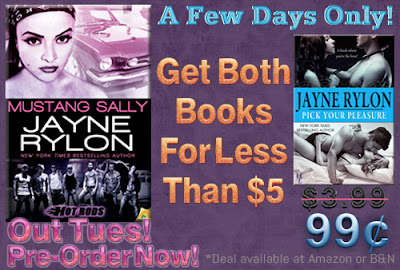 Salome “Sally” Rider is flooring the gas pedal of her pink ’69 Mustang, desperate to outrun the memory of two of her fellow mechanics getting busy with some bar skank on the hood of a classic car. On her custom paint job.

For years her emotions have withered while her lost boys, her Hot Rods, have grown closer than brothers. Maybe some down time with the Powertools sexperts will help her figure out why Eli and Alanso went looking for some strange, when Sally was waiting right at the ends of their grease-smudged noses.

Sally is dead wrong about what she thought she saw, and Eli “King Cobra” London and the rest of the thoroughly rattled Hot Rods are determined prove it. They’ll show her in the sexiest possible way that she’s not merely an interchangeable part in their well-oiled machine.

Yet just as Eli gets up the nerve to make a very indecent proposal, a ghost rises from her painful past. Threatening to slam the brakes on their future before they can get it in gear.

Happy Reading!
Jayne
www.jaynerylon.com
About the Author
Jayne Rylon’s stories usually begin as a daydream in an endless business meeting.  Her writing acts as a creative counterpoint to her straightlaced corporate existence.  She lives in Ohio with two cats and her husband who both inspires her fantasies and supports her careers.  When she can escape her office, she loves to travel the world, avoid speeding tickets in her beloved Sky and, of course, read.
Jayne is a member of the Romance Writers of America (RWA), the Central Ohio Fiction Writers (COFW) and Passionate Ink.