When Stephan gets a call from his friend Darin about a slave in distress, he is taken aback by the suggestion that he can help.  The girl in question is the property of a rather sadistic Dom Ian, but blatantly doesn’t want to be so. After making some inquiries, Darin has established that the sub is for sale for the right price. Stephan has the money, and the unattached status, to help out but there is one tiny little problem; Stephan has no interest in being anyone’s master. After some marvellous guilt trips by Darin, Stephan agrees to go and “inspect” Ian’s property and see if he wants to purchase her. Upon arrival, Stephan sees the terrified girl and knows that he cannot simply walk away. However, the dilemma is how to best help her. Not knowing how she came into Ian’s possession, Stephan is unwilling to let her loose. Without being able to get her to talk to him, he can’t decipher who put her into slavery and so can’t be sure he isn’t putting her back into danger. He resolves to take her home with him, but he can’t get her to trust him to believe that he doesn’t want her to be HIS slave. By implementing his own version of a Master/slave relationship, he starts to show her that she can trust him enough to help her escape. But Brianna isn’t a natural submissive; she is merely broken to do so. After her abuse at the hands of a Dom, will she ever be able to trust a Dom again?
Let’s clear up something. This book is not erotica. It has no sex in it, therefore cannot fit in that particular genre. That being said, it is a BDSM book. It deals exclusively with the dynamics of a Master/slave relationship, just not a sexual one. It is not an easy book to read; the themes were disturbing and reading just how broken Brianna is was slightly soul destroying. That being said, it was one of the best books I have read and I can’t wait to read more. When I read that it was TPE, I immediately thought I’d hate it due to previous experience in this genre. The beautiful way this was written made this book one that I could access and, although it left me emotionally raw, I was hooked in to the tale of these glorious characters. The tale is written in first person, from the side of both characters, and I don’t think it would have worked as well, if it was written in any other way.

Beginning with Stephan, I think he is one of the most fantastically written Dom’s I have ever read. When he meets Brianna, he doesn’t want to get involved at all but the Dom in him cannot leave her there in so much distress. His heart breaks when she bows at his feet all the time and then shrinks at his touch. He wants to help her, but I did wonder if he was really helping her in the right way. The author did well in the way she seemed to anticipate every question I had regarding his treatment of her and answered them well. I couldn’t believe he took her into his home and not the nearest police station but she took that qualm and completely obliterated it with one stroke of a pen. I cringed when he started to Dom her but then I could see how much Brianna needed that one continuity. She had been beaten and forced into that lifestyle by a completely deranged sadist; she had to get used to having her old lifestyle striped away a bit at a time to prevent a complete breakdown. He handled the situation with such delicacy that, in the end, I couldn’t fault him for his assessment of the situation. The man is also as sexy as hell; a Dom that keeps in shape, is completely focused on his subs needs and is so very naturally Dominant…..*swoon* 😀 By the end of the tale, I was completely in love with him, I just didn’t know whether or not he would be able to break through the layers of pain surrounding her. 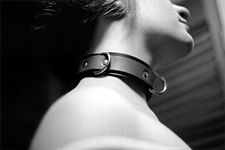 Brianna’s tale made me cry. She was so completely broken she didn’t even think of herself as an individual. Some of the tales that we encounter about her past are completely horrific and I couldn’t imagine that someone could be that cruel. This story doesn’t take place over a long period of time, but it’s so intense I feel that we got to know her quite well. Unfortunately, the character we meet is so completely broken, she doesn’t feel like a whole person.  I loved when she started to get a little more confident with Stephan, problem was that it never lasted very long. Her relationship with Lily was lovely to read; Lily was a friend who was also a role model of how she should be able to act in a D/s relationship. Again, the realisations conflicted with her conditioning and she struggled with them greatly. Although I was hacked off with the ending, and hacked off that it also wasn’t stand-alone, by the end of the book I completely agreed that this is not a tale that could be told over one book.
This is a tale that grabbed me by the heart strings and wouldn’t let me go. It shocked me, thrilled me, repulsed me and warmed my heart….after being put through an emotional wringer it left me at a place I could accept for the both of them. Bring on book two!!