Ruby felt a flush creep up her neck but quickly crushed any embarrassment. “So what?”

Troy slid his hand down the flat of her stomach to disappear inside the briefs with painstaking slowness, as if he wanted to savor every touch of her skin. He cupped her in his palm, then pushed her forward with his body until the juncture of her thighs was wedged more firmly between his hand and the table.

His voice vibrated sensually near her ear. “Do you have any idea how much it turns me on, knowing something of mine has been cradling your sweet pussy all day long?” Without warning, he thrust two thick fingers inside her with just enough force to make her cry out, bring her up on her toes. He didn’t move them, just held them there, high and tight inside her. Ruby’s head fell forward on a moan that was equal parts frustrated and relieved. She needed so much more for him, and he seemed determined to take his time. “You walked around with your naughty secret all day, didn’t you? Did the thought of me get you all wet, baby?” His thrust his fingers deeper. “Answer me or you’ll get no more.”

He rewarded her honest answer by stroking her clitoris with his thumb. “Fuck my fingers until I’m satisfied with your answers. What happens next depends on how happy they make me.” With his hand still trapped between her and the table, she began pumping her hips against the solid pressure of his fingers, whimpering as his thumb continued its unyielding assault. “What did you think about in class, Ruby?” She released an impatient sob. “Answer me, or I’ll remove by thumb.”

“No. Please, don’t.” She sucked in a shaky breath, trying to divide her focus between talking and his insistent torture of her damp, needy flesh. “I thought about w-what would’ve happened if I’d stayed the whole night.”

“Should I show you?” he growled.

In the blink of an eye, he removed the hand between her legs and spun her around to face him. Her backside hit the surface of the table hard, and he pushed her legs open forcefully. Troy deftly rolled on the condom, and drove himself home inside her in one powerful thrust. Ruby’s scream mingled with his shouted expletive. Before she’d fully registered his ample size filling her so completely, he began to move. He rolled his hips down at an angle, his swollen length making contact with her clitoris with each frantic pound into her.

Troy sunk his fingers into her hair and tilted her head back up until she looked him square in the eye. “As long as you’re with me, I don’t want some punk thinking he has the right to touch your gorgeous face. If you want to be touched, you tell me where, and I’ll take care of it. I’m the only one who touches you now, Ruby. Me.” 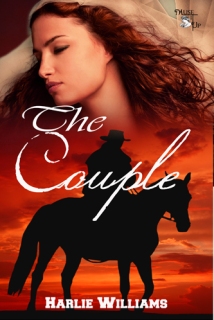 Ignoring her plea, he unsnapped her jeans, easing them down her luscious legs and onto the floor. Nibbling his way back up, he stopped by her supple thighs. The aroma of her visibly abundant arousal enchanted him. The scrap of lace she called panties barring his access was soon torn and tossed. With his hands on her waist, he began to lick, nip, and sip from her sumptuous core. The woman was a wildcat as she writhed around under his ministrations. He could tell it was sometime since she’d been tamed and he looked forward to doing just that. He wasn’t going to let her eagerness deter him from his plans though. Bringing her to the edge over and over until she begged for mercy was the first part. Even then, he had no plans to stop. Time and again, he brought her close to orgasm with his tongue on her clit and then pulled away, denying her the release she was desperately begging for. Shoving two fingers into her, she whimpered and pushed her hips up trying to get him to penetrate her further. Her desire only drove him to show her who was in control.

Please remember that all of the Rafflecopter forms will be added together as this is an event prize bag. The overall winners will be picked from the combined forms.